New research from the Bonilha Lab has been featured in the EurekAlert! Bonilha et al. (2019) published an article in the journal "Brain" titled "Neural structures supporting spontaneous and assisted (entrained) speech fluency".

Barbara and Janina presented current research from the Bonilha Lab at the 11th Annual Meeting of the Society for the Neurobiology of Language in Helsinki, Finland.

Emilie has been selected to receive the MUSC Physicians/MSTP scholarship. This one-year scholarship is funded by the physicians practicing at the Medical University of South Carolina and is an extraordinary honor. Congratulations, Emilie!

Zeke Gleichgerrcht completed his residency in Neurology after four years of training at the Medical University of South Carolina. During his last year of residency, he served as Chief Resident and was awarded the Resident Excellence in Care Award as well as the Highest In-Service Exam Score Award.

He will be staying at MUSC to complete fellowship training in Epilepsy while he continues his research in the Bonilha Lab! 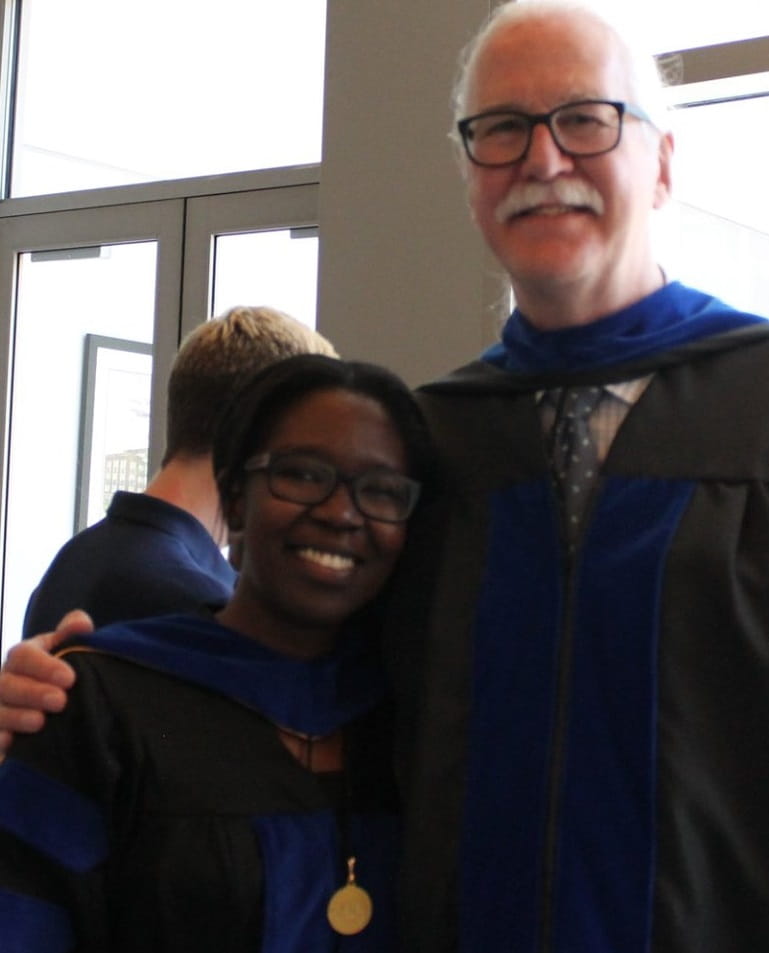 Barbara graduated from the PhD program "Biomedical Imaging" at MUSC and continues as a Postdoctoral researcher in the Bonilha Lab.

We are proud of you, Dr. Marebwa, and cannot wait to see your research career unfold!

Emilie is contributing to "The Road to Consensus in Diffusion MRI" at the annual meeting of the international society for magnetic resonance in medicine (ISMRM)! She was invited to givea talk on how to go beyond conventional DTI and to sit on an expert panel to discuss guidelines for clinical research.  Conversations between the MRI developers and clinicians are necessary to keep the field moving forward. Here you can see her in action presenting some of her original work from the same conference. Thanks, Emilie! 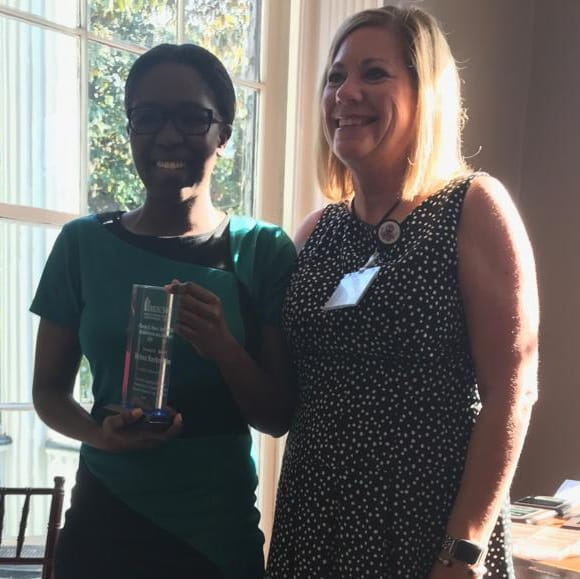 Barbara Marebwa received the Charles H. Banov, M.D. Humanitarian Award!  This award recognizes a student who has made a significant contribution locally or abroad by volunteering their time to achieve unmet community needs.

Thank you Barbara for you outstanding work with our Charleston refugee community! 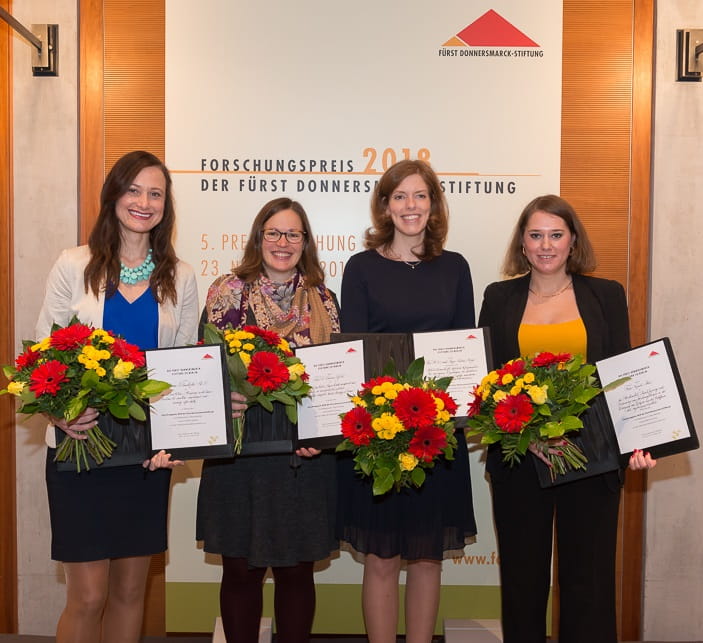 Janina received a commendation of the research award 2018 from the Fürst Donnersmarck-Foundation in Berlin. This prize is awarded for current scientific research in the field of neurological rehabilitation of people with acquired damage to the nervous system. Janina received the commendation for her dissertational work on the influence of brain lesion locations on the rehabilitation of individuals with post-stroke swallowing disorders. Congratulations, Janina!

The Bonilha lab has been busy! Read about how Dr. Bonilha and Dr. Gleichgerrcht analyzed the neural networks of epilepsy patients to predict seizure-free outcome post-surgery using a novel artificial intelligence deep learning technique and reached up to 88% accuracy.

The brain diet! A new EurekAlert! covering the recently published work of our graduate student Barbara Marebwa on the effects of a hormone called FGF23 on brain health.

Emilie received one of two student merit awards for her work on "Synergism between cortical damage and white matter disconnection contributes to aphasia severity".  She received the highest ratings from all reviewers. Emilie will be presenting her work at the Annual meeting of the Society for the Neurobiology of Language. The conference will be held in Quebec City on August 16-18. Congratulations Emilie!

Read about how aphasia researchers are tailoring speech and language therapies to individual patients in the Spring 2018 Issue of Progressnotes.

Janina received the "Sumiko Okada International Fellowship Fund 2018", a research grant honoring Sumiko Okado, a Japanese speech, and language pathologist. This fund will support Janina in regards to her travel expenses to present her research findings in an oral presentation during the 2018 Japanese-Korean Joint Swallowing Conference and the 2018 meeting of the Japanese Society of Dysphagia Rehabilitation. Congrats Janina.

CurePSP awards the Department of Neurology at the Medical University of South Carolina the title “CurePSP Center of Care” for a period of two years under the leadership of Dr. Dale. This award will benefit Progressive Subnuclear Palsy and Corticobasal Degeneration patients, their carepartners, and Health care professionals. A team of mentors, including Dr. Bonilha, will be supporting this project. Congratulations Dr. Dale.

Emilie has been awarded an Educational Stipend to attend the Annual Meeting ISMRM, June 16 to 21 in Paris. She will be presenting her work on "Diffusion Anisotropy of the Extra-Axonal Environment is Linked to Axon Alignment". Congratulations, Emilie.

Zeke has been awarded the 2018 Alliance Award by the American Academy of Neurology for best clinical neuroscience research by a neurology resident for his work on "Looking at temporal white matter structural abnormalities to predict surgical outcome after epilepsy surgery in medication refractory medil temporal lobe epilepsy". The conference will be held in Los Angeles on April 21 to 27. Check out some of his work here. Congratulations Zeke.

Zeke will be representing the Bonilha lab at the annual meeting of the American Epilepsy Society. He will be presenting his work on "Structural Connectivity Abnormalities in Adult Patients with Frontal Lobe Epilepsy: A Pilot Study" (PDF) and "Pre-surgical brain regions acting as network “influencers” may help predict post-surgical seizure control among patients with medication-refractory temporal lobe epilepsy" (PDF).

You can find the Bonilha lab in Baltimore this week at SNL 2017. Barbara (PDF), Zeke (PDF), and Emilie (PDF) will be presenting their work. If you are not able to make it, don't dispair, clicking on their name will reveal their poster.

Barbara Marebwa and Dr. Bonilha get acknowledged by EurekAlert for their recent work on network modularity and aphasia recovery.

The Bonilha lab is being recognized for its "Innovative research to improve standard of care for stroke patients.". Read the news release.

Dr. Na Jin Seo received an NIH Small Business Technology Transfer (STTR) grant. This grant will support a Phase I clinical trial of a novel sensory stimulation device on stroke survivors. Dr. Seo will be conducting this research under the mentorship of Dr. Bonilha.

Dr. Roozbeh Behroozmand received $700K from the NIH to study how brain damage causes speech impairment in stroke survivors with aphasia. A team of mentors, including Dr. Bonilha, will be supporting this project. For more information, read the full article.

Emilie McKinnon and Dr. Bonilha get acknowledged by EurekAlert. for their recent work on ventral stream structural plasticity. For more information, read the full article. 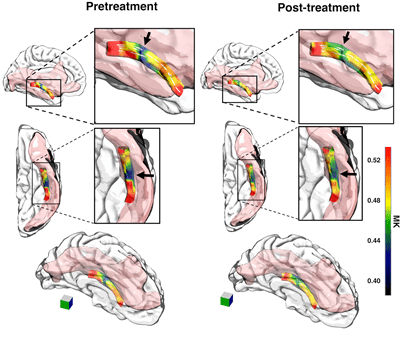 Figure 1: Pre- and post-treatment MK values along the ILF from a representative participant are shown anatomically. The ILF bottleneck, which is marked with a black arrow, demonstrates an increase in MK toward normal values from before to after therapy. The stroke lesion is demonstrated in pink. This participant demonstrated a 55 percent improvement in semantic errors.

Dr. Na Jin Seo received a Mentored Research Development Award from the Delaware-CTR ACCEL (Accelerating Clinical and Translational Research). This award will support the project "Sensory Stimulation to Enhance Hand Functional Recovery Post Stroke” to examine the neurobiological basis for the effects of sensory stimulation in enhancing hand rehabilitation outcomes. This work will be conducted under the mentorship of Dr. Bonilha and Dr. Saladin.

Dr. Bonilha and his team are recognized by the MUSC newscenter in an article covering the story of Mark Vail, a study participant. For more information, read the full article.

Emilie McKinnon was offered a position as a predoctoral trainee in the college of Graduate Studies at MUSC under the mentorship of Dr. Bonilha and supported by the NIH/NIDCD Institutional Training Grant, "Interdisciplinary Research Training in Otolaryngology and Communication Sciences." Emilie's work "Residual post-stroke integrity of white matter networks and their relationship with recovery from chronic aphasia" will focus on using Diffusional Kurtosis Imaging to study the impact of residual post-stroke microstructure of specific white matter pathways on language impairment and language recovery.

Emilie McKinnon raised 1000$ through DonorsCure to help cover her travel costs to attend the 8th Annual Neurobiology of Language conference in London, England on August 17 to 20, 2016. Donors Cure is a nonprofit organization that provides a centralized platform where donors can support specific, qualified biomedical research projects led by researchers at US universities and institutions. Emilie will be presenting her work on the relationship between therapy-related improvements in naming errors and microstructural white matter fiber properties, measured using advanced imaging techniques.

Dr. Grigori Yourganov and colleagues recently published a paper, Multivariate Connectome-Based Symptom Mapping in Post-Stroke Patients: Networks Supporting Language and Speech, in The Journal of Neuroscience. In this study, the authors compared a novel multivariate approach to predict speech and language impairment post-stroke using white matter connectivity (connectome) with predictions using a more traditional multivariate, cross-validation method from lesion based analysis. Generally, results showed that “lesion-based and connectome-based predictions are comparable in terms of accuracy but not altogether similar in terms of the spatial features that drive the predictions”. In addition, results from the connectome-based analysis showed that clinical language tasks require connectivity between the motor and sensory systems (temporoparietal junction). The authors therefore suggest that leasion- and connectome-based approaches are complementary to one another and that both methodologies should be used to advance understanding of brain-behavior relationships.

Barbara Khalibinzwa Marebwa received a travel award from the Society for the Neurobiology of Language (SNL). SNL travel awards are partially funded by the National Institute of Health and awarded to junior scientists who are members of underrepresented groups to help cover travel and registration costs to attend the 8th Annual Neurobiology of Language conference in London, England, on August 17 to 20, 2016. This scientific meeting highlights research on a variety of topics such as neural mechanisms supporting linguistic processes among others. Barbara will present her recent work investigating how the fragmentation of structural brain networks is associated with post-stroke aphasia severity.