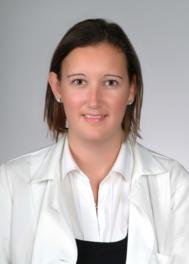 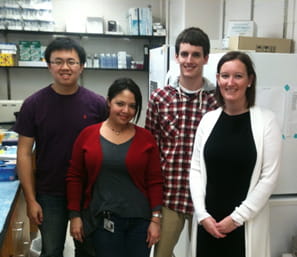 The primary interest in our lab is the role of microRNAs in breast cancer progression and metastasis. Breast cancer is the most frequently diagnosed malignancy and the second leading cause of cancer deaths in American women, second only to lung cancer. This year, an estimated 178,480 new cases of invasive breast cancer will be diagnosed among women, as well as an estimated 62,030 additional cases of in situ breast cancer in the US, resulting in approximately 40,460 deaths. In fact, every 68 seconds a woman dies of breast cancer worldwide. Breast cancer mortality is almost invariably attributable to metastasis that is clinically untreatable despite aggressive chemical and radiation therapies. Additional studies directed towards elucidation of the factors involved in progression should facilitate the design of molecularly based diagnostic and therapeutic approaches. The 5 year survival rate of localized disease is 98 percent, however this percentage drops dramatically to 26 percent in patients with metastatic disease. Therefore, understanding the pathways and processes that are involved in metastatic progression is of the utmost importance to prolong survival in breast cancer patients.

MicroRNAs (miRNAs) are endogenous 19-25 nucleotide RNAs that have emerged as a novel class of small, evolutionarily conserved gene regulatory molecules involved in many critical developmental and cellular functions. miRNAs base-pair with target mRNA sequences primarily in their 3’ untranslated region (3’UTR). Through specific base pairing, miRNAs induce mRNA degradation, translational repression, or both depending upon the complementarity of the miRNA to its mRNA target. Each miRNA can target numerous mRNAs, often in combination with other miRNAs, therefore controlling complex regulatory networks. It is estimated that there are ~1000 miRNAs in mammalian cells, and that about 30 percent of all genes are regulated by miRNAs. Over 3,000 identified mature miRNAs exist in species ranging from plants to humans, suggesting that miRNAs are ancient players in gene regulation. Their existence and conservation throughout species supports the concept that they perform critical functions in gene regulation. Indeed, the conserved evolution of both miRNAs and transcription factors highlights their importance in and the complexity of gene regulation. What makes miRNAs particularly important is their involvement in most, if not all, fundamental biological processes. Mounting evidence indicates that miRNAs may also play a significant role in cellular transformation and carcinogenesis acting either as oncogenes or tumor suppressors.

Our published studies show elevated levels of miR-204 and miR-510 in human breast tumor samples when compared to matched non-tumor controls. In addition, over-expression of miR-204 & -510 in immortalized non-transformed and non- invasive breast cancer cell lines results in increased migration, invasion, cellular transformation and an altered morphology similar to that seen in cells undergoing Epithelial-Mesenchymal-Transition (EMT) (Figure 1). Down-regulation of the epithelial marker E-cadherin and up-regulation of the mesenchymal markers uPA and Slug are observed in these cells and the Ets transcription factor family member, PDEF (prostate-derived Ets factor), was identified as a direct miR-204 & -510 target. Interestingly, miR-510 is located on chromosome Xq27, a region that is reported to be associated (amplification) with breast cancer. We have been involved in the identification of downstream targets of miR-510 as well as the elucidation of the upstream signaling pathways that are involved in its activation in order to better understand the role of this miRNA in the promotion of breast cancer. To date, no other studies have identified a role for miR-510 in cancer. miR-204 is located on chromosome 9q21, a region that is reported to be amplified in cancer. While few studies have investigated miR-204 in cancer, a microarray study revealed that miR-204 levels were significantly elevated in 14 of 20 breast cancer samples compared to normal control. In addition, a recent study showed that positive lymph node status in melanoma patients was characterized by a statistically significant elevation of miR-204 levels, suggesting a possible role for miR-204 in the metastatic process. In collaboration with Dr Jeffrey Rosen (Baylor College of Medicine, Texas) and the Breast Cancer Focus Group here at MUSC, we will build on our preliminary data to further evaluate the role of miR-204 & miR-510 as oncomirs in breast cancer initiation, progression and metastasis.

Unfortunately, there are not many successful treatments in the clinic for women who present with metastatic disease. In addition, the 5 year survival rate for these women is very low. The significance of our work is its potential to contribute important new understanding to the genetic basis of multi-step tumor development and disease progression. The presence of specific miRNA expression may also provide another much-needed indicator of metastasis. Data collected by the SEER (Surveillance, Epidemiology, and End Result) program of the US National Cancer Institute (NCI) showed that less than 10 percent of breast cancer patients had detectable distant metastases at diagnosis. These facts argue that interruption of the metastatic process could be useful for a majority of individuals with breast cancer. The ultimate long-term goal of our lab is to identify novel targets of miR-204/510 that may be therapeutically targeted in breast cancer patients with invasive and/or metastatic disease with the objective to prolong survival and/or inhibit metastatic progression.