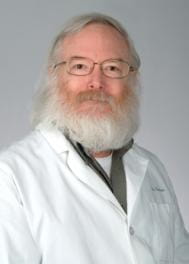 Research in the Watson laboratory is focused on two areas: (1) Molecular biology of gene regulation: To define the functional role of the Ets gene during cellular proliferation, differentiation, and transformation. (2) Molecular genetics of cancer: To identify and functionally characterize genes critical for carcinogenic transformation and progression to invasive and metastatic cancer. 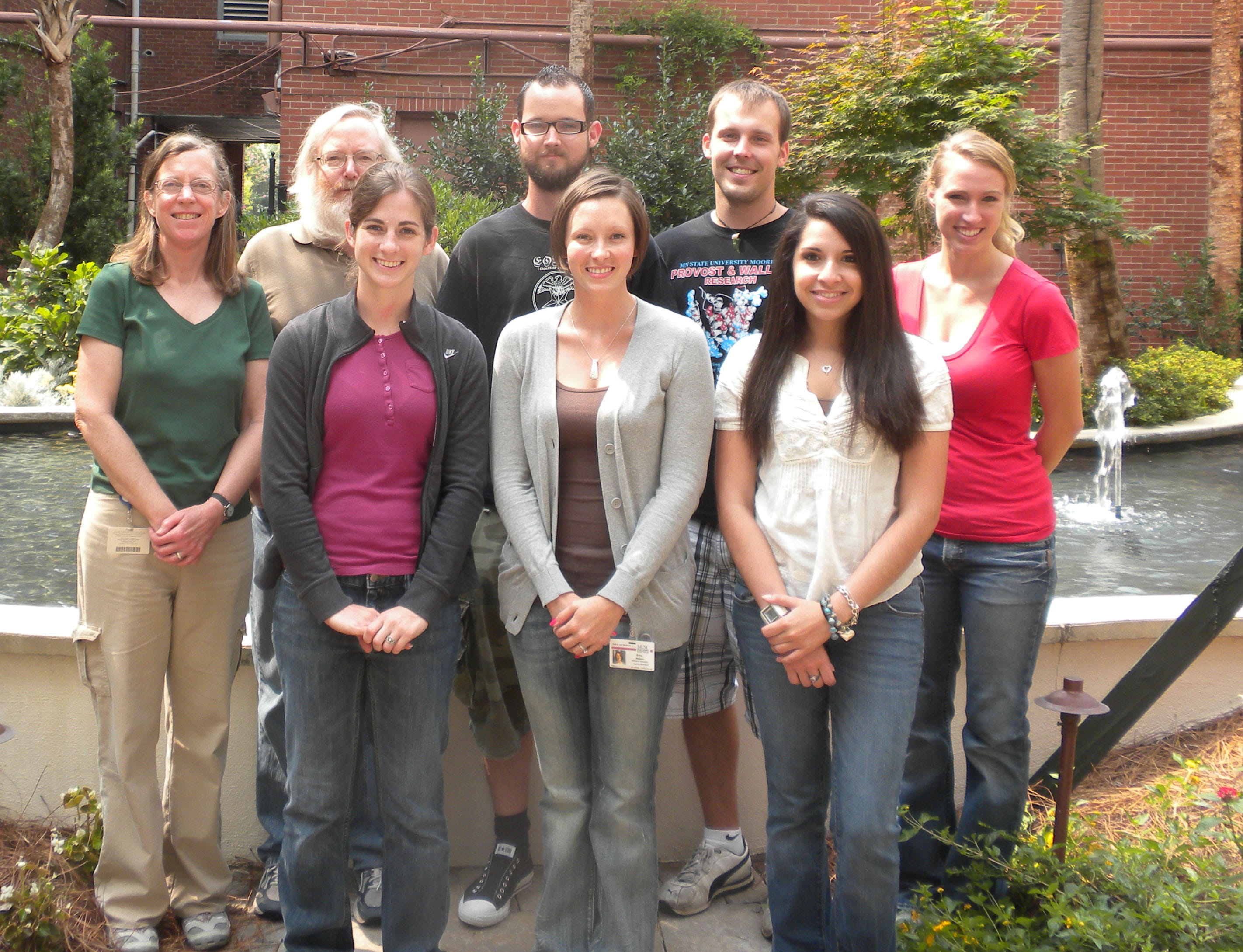 The ETS Family of Transcription Factors

The identification of Ets-related genes from a variety of metazoan species has established the Ets family as one of the largest families of transcriptional regulators. Ets proteins activate or repress the expression of genes that are involved in various biological processes, including cellular proliferation, apoptosis, development, differentiation, senescence, angiogenesis, transformation, invasiveness and cancer progression. Our research includes identification of target genes that are regulated by specific Ets transcription factors to understand the molecular mechanisms that control transcription. Furthermore, identification of target gene promoters for normal and oncogenic transcription factors provides insight into the regulation of genes that are involved in control of normal cell growth, and differentiation, as well as provide information critical to understanding cancer development.

To clarify the physiological role of Fli1 in hematopoiesis, we generated mice with the targeted disruption of Fli1. The Fli1 homozygous mutant (Fli1-/-) embryos showed hemorrhage from the dorsal aorta into the lumen of the neural tube and the ventricles of the brain beginning on embryonic day 11.0 (E 11.0) and were dead on or before day E 12.0. In addition, severe dysmegakaryopoiesis and vascular defects were found. Subsequent analyses of Fli1 chimeric mice revealed cell-autonomous defects consistent with important roles of the Fli1gene in myelomonocytic, erythroid and NK cell development. We are currently characterizing mice that express mutant Fli1 alleles or allow conditional (tissue and temporal specific) deletion of Fli1. These mice will be used to elucidate roles for Fli1 in hematopoietic and non-hematopoietic cell lineages, both in normal development and in cancer progression. 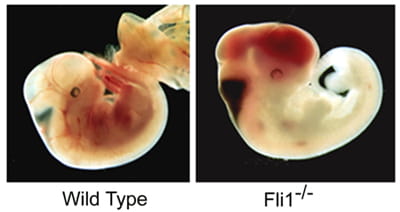 Fli1 mutant E11 embryos hemorrhage.
E11 homozygous mutant embryos dissected free of the yolk sac are easily distinguished from their wild type littermates by smaller overall size and hemorrhaging of fetal red cells into the cephalic ventricles and the central canal of the neural tube.

Cancer results from a multi-step series of genetic changes that lead to essential alterations in cell physiology such as loss of growth controls and normal apoptotic response and sustained angiogenesis, invasion and metastasis. Although Ets controls multiple processes, a common mechanism mediating many of these effects is cellular migration. One area of our research examines the hypothesis that Ets factors affect a variety of complex biological processes via control of cellular migration. Cellular migration is an important property of normal and transformed cells. During normal development, cell migration is essential for complex processes, and alterations in normal control of cellular migration are critical for tumor invasion and metastasis as well as angiogenesis.

Cell invasion is a critical step for tumor metastasis and angiogenesis. For this reason, invasion can be viewed as a key therapeutic target for cancer and other diseases. We are elucidating the mechanisms whereby Ets factors regulate cell migration as a means to understand the molecular basis of cell migration and invasion. Gene expression and chromatin immunoprecipitation studies are used to define indirect and direct target genes for specific Ets family members.

While considerable effort has been directed towards the elucidation of Ets as oncogenic transcription factors, some recent studies support a role for Ets factors functioning to suppress cellular growth, suggesting a possible tumor suppressor function. One of our projects is focused on PDEF, an epithelial specific Ets factor. PDEF expression is reduced or lost in many human invasive cancer tissues. Assays that examine different aspects of cell migration demonstrate that constitutive or inducible PDEF re-expression inhibits migration and invasion in multiple cancer cell lines, consistent with PDEF as a negative regulator of cell migration, invasion, and metastasis. Microarray and gene ontology analysis are being utilized to examine the differential expression of known effectors and modulators of cell migration and cell-cell interaction pathways. We are also characterizing the phenotypes of mice with constitutive knockout of the PDEF gene. 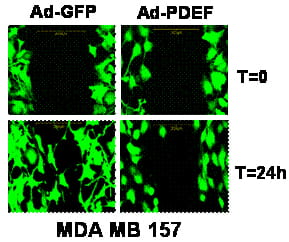 Cellular Microenvironment as an Effector of Epithelial Cell Function

It is becoming evident that Ets factors control pathways not only in epithelial cells, but also within the stromal compartment and the precise regulation of Ets function in epithelial and stromal cells affects their interaction, both in normal development and cancer. Previous studies have indicated that Ets factors are abnormally expressed in both tumor and stromal compartments, which frequently correlates with tumor progression. Our research utilizes in vitro and in vivo models to examine how cross-talk between epithelial cells and the stromal microenvironment contributes to progression to metastatic cancer.

The laboratory has identified novel genes based upon their differential expression during carcinogenic progression by combining Subtractive hybridization, Representative Difference Analysis and cDNA array technologies. Currently, these genes are being investigated for their role as potential markers for early diagnosis and/or prognosis of cancer, for correlating gene expression or mutations of selected genes with malignant progression using cell culture and transgenic animal models, and for potential therapeutic applications.

CaSm (for Cancer-associated Sm-like) is overexpressed in human cancer and is necessary for the transformed phenotype of many cancer cells. Our work has demonstrated that blocking CaSm function inhibits the growth of cancer cells and supports our hypothesis that CaSm represents an important target for anti-tumor therapy.

Our studies demonstrate that:

Although a possible role for TXAS regulated pathways in tumor progression has received limited study, we are continuing to pursue its potential significance, especially since it could emerge as a readily accessible therapeutic target. 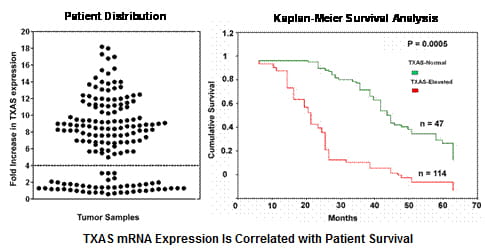 The laboratory is actively assessing the potential utility of genes that are uniquely expressed in cancer cells as diagnostic biomarkers. We have demonstrated the diagnostic value of survivin expression in exfoliated cancer cells present in the urine of bladder cancer patients.