The Medical University of South Carolina

Founded in 1824 in Charleston, The Medical University of South Carolina is the oldest medical school in the South. Today, MUSC continues the tradition of excellence in education, research, and patient care. MUSC educates and trains more than 3,000 students and residents, and has nearly 13,000 employees, including approximately 1,500 faculty members in six colleges (Dental Medicine, Graduate Studies, Health Professions, Medicine, Nursing and Pharmacy). As the largest non-federal employer in Charleston, the university and its affiliates have collective annual budgets in excess of $2.2 billion. MUSC Health operates a 700-bed medical center, which includes the only nationally recognized Children's Hospital in the state, the Center for Telehealth, the Ashley River Tower (cardiovascular, digestive disease, and surgical oncology), Hollings Cancer Center (a National Cancer Institute-designated center), Level I Trauma Center, Institute of Psychiatry, and the state’s only transplant center. In 2016, U.S. News & World Report named MUSC Health the number one hospital in South Carolina.

The Department of Neurosurgery at MUSC was founded in 1963 as a division of general surgery. Since its establishment, it has been transformed according to the changing needs for patient care, education and research. There is evidence that some neurosurgical procedures were performed at MUSC as early as the nineteenth century, even before the development of specialized neurosurgical services.

The MUSC Neurosurgery Residency Program was established in 1964 by its first formally trained neurosurgeon, Dr. Julian Youmans, and was later approved by the Accreditation Council of Graduate Medical Education (ACGME) that same year. The residency program is now a seven-year program that is approved for two PGY1 neurosurgery positions annually.

Clinical activities are carried out at the Medical University Hospital, the MUSC Children’s Hospital, and the Ralph H. Johnson Veterans Affairs Medical Center.

Read more about the history of MUSC’s Neurosurgery Program.

PGY-1: The internship is supervised by the Department of Neurosurgery.  Approximately half of the year is devoted to general neurosurgery while the remaining months are spent completing rotations in neurointerventional surgery, trauma surgery and a required three months of critical care and neurology.

PGY-2 through PGY-4: During these years, the resident obtains a comprehensive introduction to clinical neurosurgery and related disciplines at the Medical University Hospital, the MUSC Children’s Hospital, and the VA Hospital. The resident will have a broad exposure to all facets of neurosurgical care in the inpatient and outpatient settings. The resident will gain progressively increasing clinical responsibilities in the operating room, the hospital and the outpatient settings. There is also a progressive increase in the teaching responsibilities for medical students and other residents. 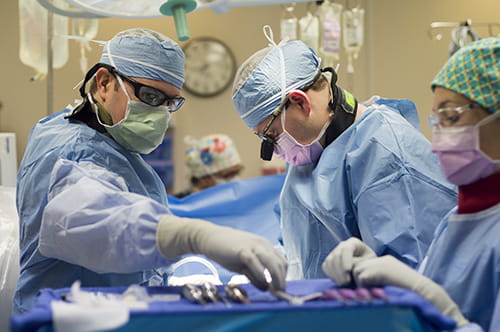 PGY-6: The sixth year is devoted to research, with a broad range of basic and clinical science projects available through the Department of Neurology and Neurosurgery and throughout the MUSC Medical Center. Neurosurgery integration within the department facilitates collaboration with basic science researchers in numerous areas of study. Guidance and mentoring are provided to optimize the individual resident’s experience.

PGY-7: The seventh year resident serves are the senior chief resident.  During the year, the resident will rotate between the services at regular intervals. The resident will be involved in all levels of inpatient and outpatient clinical care, with increasing responsibility based on the individual’s experience and ability. In addition, the senior resident will have additional administrative duties including the organization of clinical neurosurgery conferences, call schedules, etc.