Each year, approximately 1.5 million Americans sustain a traumatic brain injury (TBI) (1). The number of TBI-related hospitalizations alone, approximately 235,000 per year, is more than 20 time the number of spinal cord injuries, another key disabling injury (2). As a result, an estimated 5.3 million Americans live with disability from traumatic brain injury (1). The types of problems most frequently experienced by people with a TBI are cognitive, emotional, behavioral, and to a lesser extent physical ones. Most of the previous research, however, did not follow and reassess the same patients over time to determine the long-term consequences of TBI and to document changes in health care service needs. More importantly, the majority of previous studies focused only on a subgroup of people, usually those with the most severe injury. Thus, many questions about what happens to people with TBI remain. Finding out about the long-term problems people with TBI experience, what kinds of services they need and why they might not be getting them is very important, especially among those with less severe TBI who do not usually go to rehabilitation facilities after their injuries.

To understand fully what happens to people with TBI, “population-based” studies are needed. These studies identify a group of people that are representative of the broad range of those who experience a TBI and provide more complete information about the impact of TBI in a state, a region, or in the U.S. To date, only one population-based TBI outcome study has been conducted. This study focused on people hospitalized with TBI and was funded by CDC from 1995 through early 2001 through a collaboration with the Colorado Department of Health and Environment and researchers at Craig Hospital (3). Early results from the Colorado Traumatic Brain Injury Registry and Follow-up System were key to estimating the number of people living with disability in the U.S. (1, 4, 5).

In 1998, CDC funded a second population-based TBI follow-up study, the South Carolina Traumatic Brain Injury Follow-up Registry (SCTBIFR), which is currently ongoing. This web site presents the key features of the study, summarizes the participants’ characteristics, and the main findings one year after sustaining a TBI.

The main objectives of the SCTBIFR are to a) document the health status, functional limitations, community re-integration, service needs, and other outcomes of TBI through a population-based sample of people hospitalized with TBI; b) disseminate the findings through media outlets, reports, scientific presentations, and peer-reviewed journals; and c) provide information to help participants get the health care services that they need. The overall goal is to improve the lives of people with TBI by providing evidence of what problems they experience as a result of their TBI and to identify the health care services needed for an optimal recovery. SCTBIFR informs participants about services available within the state and provides contact information for the agencies that provide those services.

SCTBIFR is broader in scope than most of the TBI studies that assess outcome. It provides statewide, population-based data on a representative sample of South Carolinians who are hospitalized with TBI, and includes people with mild, moderate or severe TBI. The study is designed to identify which individuals with TBI develop residual deficits that preclude return to work or school, which of them return to full and productive lives, and the factors that contribute to these differing outcomes. Secondary conditions such as substance abuse and behavioral problems and other risk factors are also assessed.

All residents of South Carolina, aged 15 years or older, identified from an ongoing CDC-funded TBI surveillance system as being discharged from an acute care hospital in SC between January 1, 1999 and June 30, 2002 with a TBI diagnosis, were eligible for the study. A TBI-related hospitalization was defined according to the CDC case definition as a hospitalization that included one of the following International Classification of Diseases, Ninth Revision, Clinical Modification (ICD-9-CM) diagnostic codes among any of the primary or secondary hospital discharge diagnostic fields: (1) N800.0 to N801.9 (fracture of the skull or base of the skull); (2) N803.0 to N804.9 (other and unqualified and multiple fractures of the skull); (3) N850.0 to N854.1 (intracranial injury, including concussion, contusion, laceration, and hemorrhage); and (4) N959.01 (head injury not otherwise specified).

For each study year, a random sample of approximately 1300 participants was selected from among the nearly 2,800 South Carolinians hospitalized with a TBI and still alive at the time of discharge, and about 750 people were interviewed annually. Injury severity was categorized according to the Abbreviated Injury Scale (AIS) obtained using ICDMAP-90 software (6,7). The AIS rates each injury sustained on an ordinal scale from 1 (minor) to six (fatal). Approximately two-thirds of the sample of participants selected for the study each year had a moderate to severe TBI (AIS score for the head greater than 3) and one-third selected had a less severe TBI (AIS score for the head less than 3). All persons with TBI coded with N959.01 are assigned AIS of 2.

Clinical information about the TBI including hospital discharge disposition and early outcome was abstracted from medical records. Information on pre-injury health status, TBI outcomes, service needs and barriers to health care services is obtained by telephone interviews conducted with each injured person (or a proxy if they are unable to participate) at one, two and three years after hospital discharge from the initial injury. The interviews take approximately 40 minutes to complete. First year interviews on all SCTBIFR participants are complete; second and third year interviews are still underway.

Outcomes assessed in the telephone interview include ability to perform activities of daily living such as bathing or showering and instrumental activities of daily living such as shopping, employment, and driving. General health statuses, employment, problems related to behavioral and cognitive problems as well as health care service needs are also assessed by telephone interview. The project uses mostly standardized survey tools to collect this information.

Of the eligible persons included in the study sample, 2,118 (55.2 percent) completed the first year interview within 9 to 15 months post discharge (mean equal to 13 months). Of those who did not complete the interview, 904 (23.6 percent) could not be located, 643 (16.8 percent) refused to participate, and 170 (4.4 percent) did not respond to the invitation messages. Two hundred eighty-five (13.5 percent) of the one-year interviews were completed by a proxy because the person with TBI was unable to complete the interview.

Tables 1 to 3 (PDF) present the number of persons hospitalized with TBI who were discharged between January 1, 1999 and June 30, 2002 by different demographic and injury characteristics as well as selected one year outcomes. The tables present either the actual or weighted distributions of each characteristic and outcome depending on whether information was available for the entire population of SC residents hospitalized with a TBI or only available through participation in the SCTBIFR. For example, in table 1, the number of persons with TBI by gender, race and insurance status are the actual numbers because statewide hospital discharge data provided this information for all hospitalized TBI cases. In contrast, the number of persons with TBI by personal annual income, marital status, and education are weighted because this information was obtained only on the 2,118 SCTBIFR participants who completed the one-year follow-up interview. To derive estimates that reflect the different characteristics of the entire population hospitalized with a TBI, based on the 2,118 participants who completed the one-year interview, weighting was necessary to adjust for differences in sampling selection and nonresponse. Yellow highlighting denotes weighted characteristics and outcomes.

Between January 1, 1999 and June 30, 2002 there were 7,613 South Carolinians who were discharged from one of 62 acute care hospitals in South Carolina with a TBI diagnosis. Table 1 presents the number of persons with TBI by demographic and socioeconomic characteristics. Of those discharged alive with a TBI, there are significant differences in the proportion of cases by age and gender. Overall, males are more likely to be discharged alive with a TBI (64 percent) compared to females (36 percent). However, this difference is greatly reduced by ages 64 to 74 (54 percent males) and reverses by ages 75 and older (39 percent males). A higher proportion of those hospitalized with TBI are white (70 percent) compared to black (25 percent) and this increases significantly with older age. At the time of hospital discharge, 16.2 percent were uninsured. The lack of insurance was more frequent among the younger persons. Almost half (43.6 percent) of the hospitalized persons with TBI did not complete high school or have an equivalent general educational development (GED) degree.

Slightly more than one-third (37.5 percent) of those discharged alive had a mild TBI (AIS equal to 2) and roughly two-thirds of the cases suffered moderate (21 percent) to severe TBIs (41 percent) (see table 2). Almost half (49 percent) of all hospitalized persons with TBI were the result of traffic-related motor vehicle injuries. The cause of injury varied significantly by age group. For example, the elderly were significantly more like to have a TBI as a result of a fall whereas younger people were more likely to be involved in a motor vehicle crash.

At approximately one year post injury, 8.8 percent of persons discharged alive with a TBI had died (see table 3). One-year mortality increased significantly with older age. Almost half (47.4 percent) of all persons with TBI reported one or more limitations in activities of daily living (ADL) (e.g. dressing, bathing feeding oneself) at one-year post injury. In general, more limitations were reported among older people compared to younger ones. Finally, 44.5 percent of the sample reported at least one unmet health care service need at one-year post injury (see table 3). Unmet service needs include help finding a job, improving job skills, as well as obtaining medical care or social services. Subjects who reported two or more unmet Health care service needs were significantly more likely to be between the ages of 25 and 54 (39 percent) compared to those aged 15 to 24 (23 percent) or those 55 years and older (16 percent).

Other Selected Findings of the SCTBIFR 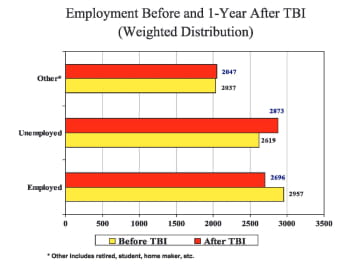 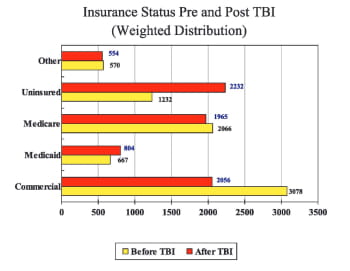 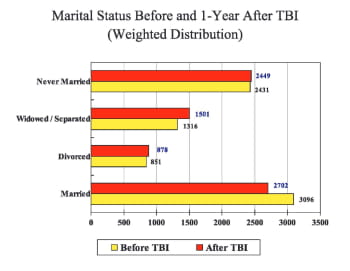 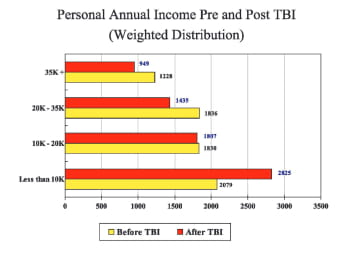