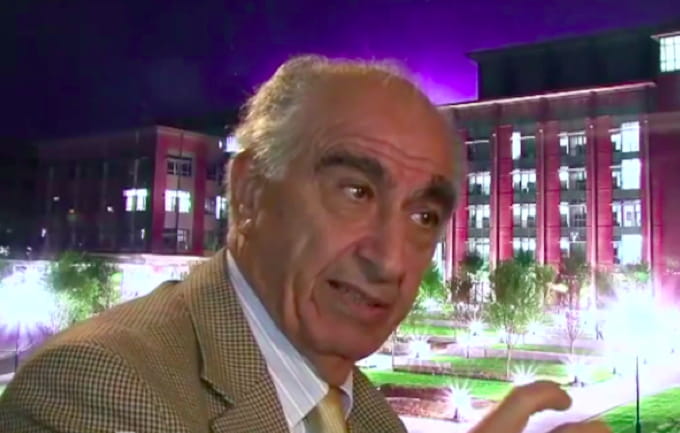 Discussing advantages of tissue-based pacemaker for clinical use and its implication for patient-specific treatment of arrhythmia.

Discussing advantages of tissue-based pacemaker for clinical use and its implication for patient-specific treatment of arrhythmia.

The Cardiac Signaling Center is a joint venture between the University of South Carolina, the Medical University of South Carolina, and Clemson University and is devoted to performing cutting-edge research at the intersection of basic science and clinical medicine. The Center is led by its founding director Dr. Martin Morad who was appointed by the South Carolina legislature in 2008 as the Blue Cross Blue Shield Endowed Chair in Cardiovascular Health. Under Dr. Morad’s leadership the Center has increasingly drawn funding from both private and public sources and continues to attract world-class faculty and research fellows.

The Cardiac Signaling Center draws upon the clinical, biological, and engineering expertise of its sponsoring universities to study molecular cardiovascular mechanisms and develop new therapeutic approaches for heart disease. Central to this effort is research that takes advantage of recent progress in stem cell biology, tissue engineering, and medical genetics to develop clinically usable cells which can be implanted into patients to treat diseases of the heart. A key advantage of this approach is that it avoids the problem of rejection commonly encountered using tissue from another individual. The laboratory’s ultimate goal is to build upon these advances and techniques to engineer a tissue-based patient specific pacemaker capable of regulating a patient’s heart beat over a lifetime. I the past 5 years the Center was granted 2 US patents for Bioengineering the tissue-based pacemaker and for treatment of cardiac arrhythmias.

Recent breakthroughs in understanding of the molecular and genetic signaling that lead to pluripotency of stem cells have led a number of labs around the world to attempt transforming adult human cells into pluripotent stem cells and then direct such stem cells to differentiate into a particular cell type, e.g. cardiac or neuronal, vascular, etc. This approach, i.e., using patient’s own adult skin cells to develop cell specific tissues, was made possible by transfection of a set of 4 “stemness genes” rendering the adult human dermal fibroblasts into pluripotent stem cells. At the Cardiac Signaling Center, we too have a major funded program for development and use of human iPS cardiomyocytes and cardiac progenitor cells in collaboration with scientists from California, UK, and Germany (see collaborators). Our team in Germany was the first to use human skin biopsies that were then re-programmed to display robust heart cell characteristics. Following these seminal experiments, we too in Charleston have developed number of human fibroblast derived heart cell lines that we have characterized electrophysiologically. We have already reported that the calcium-signaling properties of these stem cells derived cardiomyocytes is similar if not identical to those of adult mammalian heart cells, making these bioengineered cells good candidates to use in cardiac repair and regeneration.

Human IPSC technology makes it also possible to generate cellular models of the human disease for experimental use, by similarly reprogramming the patient’s cells carrying the defective gene, bypassing the expensive and often poorly relevant mouse models of human disease. Such cells can then be used to test directly the efficacy of various therapeutic drugs or approaches, with enormous commercial benefits to the pharmaceutical industry. Generating iPS-CM from a patient suffering from CPVT-induced arrhythmia, caused by a point mutation in the major calcium release channel of the heart, the ryanodine receptor, we succeeded in generating cardiomyocytes that showed calcium-signaling defects characteristic of this pathology. This type of approach opens up the possibility of studying different pathology-inducing mutations in a laboratory setting and developing drug therapies for each specific defect, without resorting to use of animal models that may not be appropriate for the human form of the disease.

Because well over 150 point mutations have been identified in the ryanodine receptor that cause at time lethal arrhythmia in young women and men, we developed a more systematic approach of studying this disease known as catecholaminergic polymorphic ventricular tachycardia (CPVT1), using CRISPR/Cas9 gene editing to introduce the CPVT1-associated mutation into our normal bioengineered cardiomyocyte. This approach obviated the need to use patient biopsies, which is at time either rare or not available. We have already created 7 lines carrying these disease- associated mutations and have discovered major differences in their functional phenotypes. We are now probing the structure/function implications of these domain-specific mutation and determining their drug specificities. Current Researchers: Dr. Naohiro Yamaguchi, Dr. Hua Wei, Xiao-hua Zhang. 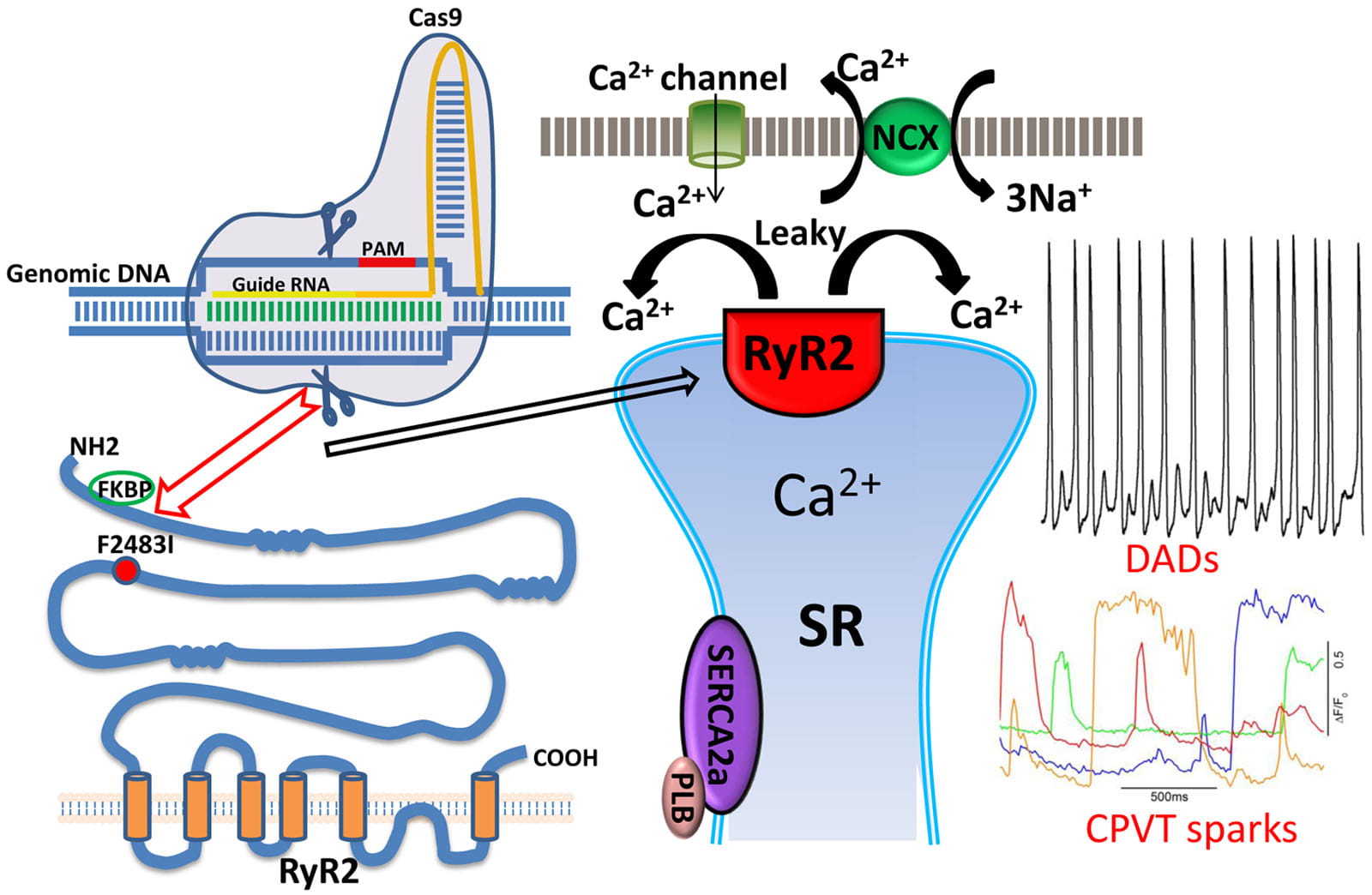 Development of a Biogenic Pacemaker

Irregular heartbeats of varying severity are common in aging individuals who are treated with drugs, laser ablation, and implanted battery-operated pacemaker devices.  Pacemaker devices are expensive, subject to breakdown, battery rundown, and can cause local tissue damage. Recent advances in understanding of the mechanisms responsible for spontaneous electrical oscillatory activity of natural pacemaker of the heart (SA-Node), and identification of genes and proteins involved in normal biological pacing, have made it possible to undertake a realistic effort to develop a tissue-based biogenic pacemaker. We propose that cell-based pacemakers may be developed using human induced pluripotent stem cells (iPSCs) that have been cultured and re-engineered to act as robust cardiac pacemakers. This approach builds on our own detailed electrophysiological and calcium signaling studies showing that biological pacemaker of mammalian heart operates through inter-laced calcium oscillatory activities of two sub-cellular components, mitochondria and sarcoplasmic reticulum, that appear to serve as the master electrical oscillator of the heart. In order to functionally insulate the bioengineered cells from the electrical load of atrium or ventricle when they are implanted in the patient heart, we have overexpressed the human HCN4 gene in them using a non-viral transposon system called sleeping beauty. The Sleeping Beauty transfection approach was developed by our German collaborators in Berlin Dr. Zsuzsanna Izsvac. Compared to electronic battery-driven pacemakers, biogenic pacemakers will have the great advantage of having their own endogenous cell-based batteries, be regulated by patient’s own nervous systems, last for the lifetime of the patient, and reduce the total cost of manufacturing or maintaining them. Currently, we are generating spontaneously beating cell colonies in culture, which are derived from the human fibroblasts carrying the HCN4 gene and are comparing their pacing characteristics to the native mammalian isolated sinoatrial node cells to improve and assure reliable pacing activity for years. Current Researchers: Dr. Xiaohua Zhang, Dr. Hua Wei, Martin Morad, Z. Izsvac.

Oxygen Sensor of the Heart: Calcium Channels and Acute Hypoxia

In working heart muscle, acute blockage of blood flow is followed by a rapid drop in oxygen levels that within minutes’ causes irreversible tissue damage. Hypoxia is marked by a cascade of events that at the cellular level includes reduced energy production, altered ion channel activity, and impaired calcium signaling leading eventually to arrhythmia, cardiomyopathy, and heart failure. While calcium channels have long been known to respond to hypoxic insult, we have recently shown that a decrease in oxygen tension rapidly suppresses calcium current. Exploring the molecular mechanisms mediating this effect of oxygen withdrawal, we uncovered a signaling mechanism whereby hem-oxygenase bound to calmodulin/Cam-kinase motif of calcium channel’s cytosolic domain binds oxygen. The resulting conformational change is then transmitted to calcium channel, allowing it to respond to changes in oxygen tension, and thereby serving as rapid oxygen sensor of the heart. The detail of this signaling pathway is presently under intense investigation in CSC in Charleston.  To this end we have developed a novel technique for measuring oxygen levels around cells using ORMOSIL technology. This approach allows us to directly compare the oxygen levels that the cell sees with physiological changes in ionic current. We have created recombinant clones of calcium channel carrying mutations in regulatory domains of the channel to determine the molecular domain of the channel for oxygen sensing. Further, since the ion channel fingerprint of cardiac cells differs with developmental stage and cell type we are testing hypoxia in a variety of cellular models including neonatal cardiomyocytes and Stem cell-derived human cardiomyocytes. These strategies bring us closer to understanding how the heart responds to hypoxia hopefully providing insight as to how to combat the damaging effects of hypoxia in the heart. Current Researchers: Juan Carlos Fernandez-Morales. N. Yamaguchi.

The development of synthetic molecular probes capable of reporting cell’s inner workings was a major milestone in physiological research. Fluorescent probes allowed researchers to observe and measure dynamic signaling at a subcellular level, leading to exciting discoveries about how the heart beats. However, findings in our laboratory over the past decade have shown us that critical signaling often occurs across micro- or nano-domains, such as the mitochondria, rather than throughout the whole cell. Developing probes targeted to these nano-domains and are capable of revealing the delicate signaling pathways therein will give us novel insights into how the heart beats and why it fails

At the Cardiac Signaling Center we have constructed a number of genetically encoded probes targeted to the critical proteins of calcium signaling pathway of the heart. In this effort, we were greatly aided by our collaborators in UK, Drs. Helassa and Torok. We are now examining the molecular cross-talk between the proteins of calcium-signaling pathway using our new calcium-sensitive probes directed to mitochondria, the ryanodine receptors, and SERCA2a and are gaining unprecedented insights into nano-domains of calcium-signaling proteins. Combing the genetically encoded probes with the powerful and rapid imaging of TIRF and confocal imaging we are obtaining novel insights into cardiomyocyte function. Current Researchers: Dr. Xiaohua Zhang, N.Helassa, K. Torok.

The human heart contracts regularly to pump blood throughout a lifetime maintaining a tremendous workload equivalent to pushing one ton the length of a football field each day. This intense physical demand on the heart requires huge availability of energy that is supplied on beat-per-beat level by generation of ATP by the mitochondria. Previous work has already shown that mitochondrial metabolism is regulated by calcium, effectively linking excitation-contraction coupling and ATP production. However, much controversy exists as to the extent of mitochondrial involvement in beat-to-beat calcium cycling.

In our laboratory at MUSC we are addressing this problem using several different approaches. We are using confocal and TIRF microscopy along with genetically engineered fluorescent biosensors targeted to the mitochondrial matrix, to directly measure mitochondrial calcium metabolism. By monitoring calcium and other properties as the heart beats we hope to uncover the mitochondrial role in excitation-contraction coupling. Similar efforts have recently led us to identify a novel calcium-signaling pathway in adult atrial and ventricular myocytes which is triggered by shear-stress forces originating from the mitochondria. Currently we are searching for the components of this signaling pathway and are investigating its physiological and pathophysiological relevance. Current Researchers: Dr.  Xiaohua Zhang, N. Helassa.

The goal of my research is to understand regulatory mechanisms of calcium signaling in cardiac muscle cells. I am currently interested in the regulation of RyR2 and Cav1.2 by calmodulin, a ubiquitous cytoplasmic calcium binding protein. During cardiac muscle contraction, elevated cytoplasmic concentrations of calcium and calcium-bound calmodulin regulate a number of proteins including these ion channels by a feedback mechanism. To address functional significance of calmodulin regulation of RyR2 and Cav1.2, I am characterizing wild type and mutant channels in vitro (heterologous cell expression) and in vivo (mutant mouse model). I have recently generated a genetically modified mouse impaired in calmodulin regulation of RyR2. Prolonged SR calcium release was measured in cardiomyocytes isolated from mutant mouse hearts. In addition, cardiac hypertrophy and early death of the mutant mice were observed. This mutant mouse is a powerful model to analyze how abnormal calcium homeostasis activates signaling pathways underlying cardiac hypertrophy.