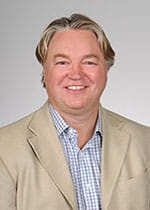 Development of a simple two-cell embryo to a complex multicellular organism is a highly dynamic procedure requiring orchestrated cell movements and multiple interactions between cells and their surroundings. As cells differentiate, not only do they receive extra-cellular signals they secrete and display signals of their own, thereby defining the makeup of their local environments. The result of these intercellular communications is the controlled differentiation of populations of progenitor cells to produce novel cell types. The repertoire of genes expressed by the cell defines the phenotype. Gene transcription therefore plays a critical role in regulating cell fate. To comprehend the molecular mechanisms controlling embryonic development my laboratory is, therefore, attempting to understand how transcription factors interact with extracellular signaling mechanisms to drive cell differentiation. Most organs are a complex array of different cell types and tissues, all of which dynamically interact to regulate organogenesis. Tissue complexity can make it challenging to measure the contribution of a specific transcription factor to overall organ or tissue development. However, the liver, in which 80% of the cells are hepatocytes, offers an attractive and relatively simple system in which to study the role of transcription factors during morphogenesis and development. In the laboratory, we use transgenic and knockout mice and genetically modified iPSCs to uncover the mechanisms through which transcription factors and cell signaling molecules are required to drive liver development.

The liver has vital endocrine and exocrine functions that regulate a diverse array of metabolic activities. Although specific forms of inborn errors of hepatic metabolism are relatively rare, cumulatively they are common and without treatment are often fatal. To date, a liver transplant can treat the most severe hepatic metabolic deficiencies. Unfortunately, the number of available donor livers is limited, and demand for transplant-quality livers continues to increase. With donor livers being scarce, it has been proposed that cell transplant therapy may offer an alternative to an organ transplant. One source of hepatocytes for transplant could be human iPSCs. Several projects in the laboratory, therefore, focus on generating functional hepatocytes from iPSCs.

Metabolic liver disease can also often be treated using small molecules or biologics that, in general, have an established track record of success. With this in mind, we are developing a platform that will facilitate the efficient identification of treatments for rare inborn errors of hepatic metabolism. We propose to 1) establish human pluripotent stem cells harboring genetic variants associated with disease in patients, 2) differentiate the stem cells to hepatocytes and examine whether genetic variations recapitulate the disease in culture, 3) establish assays that are compatible with moderate to high throughput screening to identify existing drugs that could be repurposed to correct the pathophysiology of the disease, and 4) establish the efficacy and safety of lead drugs using humanized animal models and human trials.