At MUSC Neurology we are dedicated to improving the lives of others. We have a variety of faculty that have used their years of experience to help not only in the United States, but on a global scale.

Kenton R. Holden, M.D., Professor of Neurology and Pediatrics at MUSC, is now in his 25th year of participating in global health outreach. He is the Medical Director of a team sponsored by St. Philip's Church in Charleston, SC which provides medical care to those in need in Honduras. Over 25,000 people have been cared for through this ongoing program since its inception. He is also a Visiting Professor of Child Neurology and Epilepsy at Hospital Escuela-National Medical School of Honduras as well as having served as an Adjunct Professor at Duke University's Global Health Institute.

Dr. Holden was involved in founding the first Neurology Training Program in Honduras (2000) also at the Hospital Escuela-National Medical School of Honduras and remains on their Advisory Board. He has also received the Faculty Teaching Award (2008) and the Distinguished Service Award (2014) from the College of Medicine, University of Honduras. Of his 107 peer-reviewed publications, 26 have been in collaboration with his Honduran colleagues. Due to some of his efforts, blood-spot screening for metabolic and genetic diseases in newborns and ketogenic diet therapy for epilepsy have been introduced to Honduras.

In February 2015, Dr. Holden's long-time goal of a telemedicine connection between MUSC and Honduras became a reality -- the first international connection for MUSC telemedicine was completed and patient consultations were successfully performed. Dr. Holden has also served as Co-Director with Dr. Andrea Summer of the Topics in Global Health Introductory Course sponsored by the MUSC Center for Global Health since its inception.

The World Hypertension League (WHL) is a non-profit, charitable organization dedicated to the prevention and control of hypertension at the population level. Daniel Lackland will serve four years as President beginning September 2015. The purposes of the WHL include:

The WHL has a global Network of member societies and partners including World Stroke Organization, World Heart Federation, American Heart Association and the global efforts of the NIH, CDC and WHO. Regional Offices are currently located in South America, India, China, Africa and Europe. The Journal of Clinical Hypertension is the official journal of the WHL with the WHL Newsletter a globally distributed education and information resource.

For the past 10 years, the SEMI-NUC project has functioned as a prospective cohort study of residents near the Semipalatinsk nuclear test site. This population has stroke as the leading cause of death with risks begging early in life. The unique attributes of the population includes excess environmental and radiation exposures as well as a high sodium and alcohol intake.

The purpose of this NIH-funded study is to determine whether a culturally-sensitive multipronged post-discharge intervention can significantly reduce blood pressure, enhance achievement of guideline recommended targets for risk factor control, and lower recurrent vascular events in a LMIC (Nigeria). In Phase 1 of the study, a chronic care model-based intervention was designed and tested by utilizing focus groups to obtain information about barriers and facilitators of adherence to evidence-based secondary stroke prevention treatments in Nigeria. Subsequently, an intervention comprising a stroke patient report card, cell phone text messaging from providers, and a series of in-clinic education video session was developed. After extensive review of the intervention by a task force, THRIVES is currently in Phase 2 of the study. In this phase, the tailored THRIVES intervention will be tested for efficacy among 400 stroke patients recently discharged from four medical care facilities in South Western Nigeria via a randomized-controlled trial. THRIVES anticipates being a model for successful and cost-effective stroke preventative care in other countries in Sub Saharan Africa. Visit the GACD website for more information.

This NIH-funded grant aims to evaluate the premier genetic and environmental risk factors for stroke in Africa, while simultaneously training professional and building sustainable capacities in phenomics, biobanking, genomics, biostatistics and bioinformatics for the high-level investigation of stroke. SIREN seeks to accomplish this goal via a concise network of research and educational collaborations within Africa, along with inputs from renowned content experts in the United States and the United Kingdom. SIREN is comprised of three interwoven projects geared at a comprehensive investigation of stroke and a training core aimed at building research capacity that will outlast the study period. These projects will be implemented in Nigeria, Ghana, and South Africa. Visit the H3Africa website for more information.

This NIH funded research project seeks to develop a culturally-acceptable, effective, and sustainable way of utilizing the rapidly growing penetration of mobile phones among people in Sub-Saharan Africa (SSA), to improve the currently poor control of hypertension among patients at high risk for future stroke. Specifically, PINGS hopes to demonstrate that a multi-level integrated approach will be effective in improved sustained blood pressure control in recent Ghanaian stroke patients. The study also aims to develop human capital in SSA to conduct locally-relevant, high-quality stroke research in the future. In particular, this study will preliminarily test a strategy that incorporates mobile phone texting and home blood pressure monitoring directed by trained nurses, to improve patient adherence to proven medical therapies for treating hypertension. 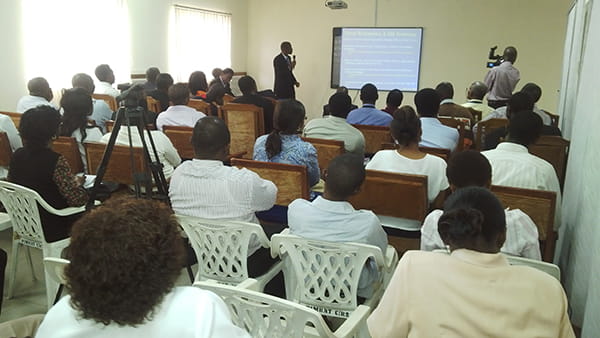 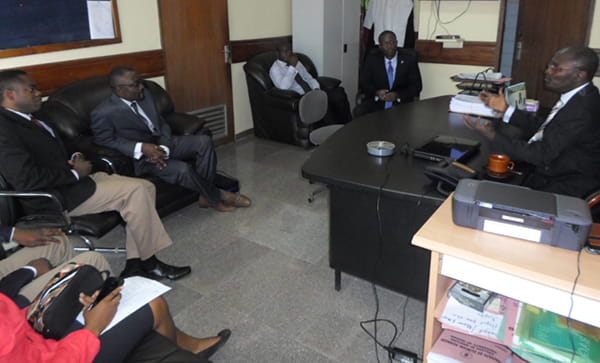 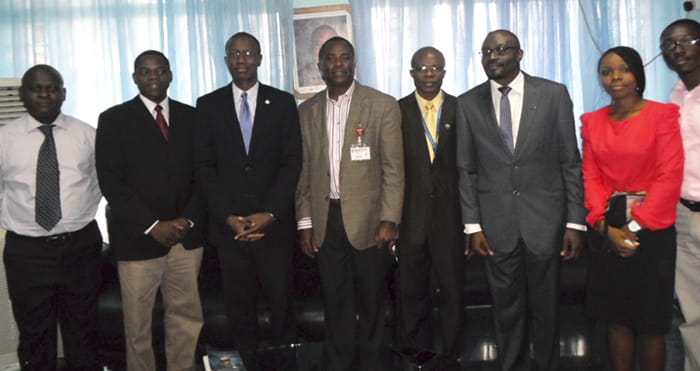 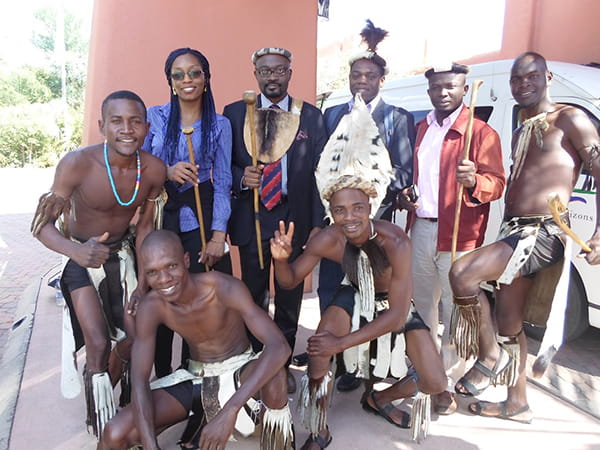 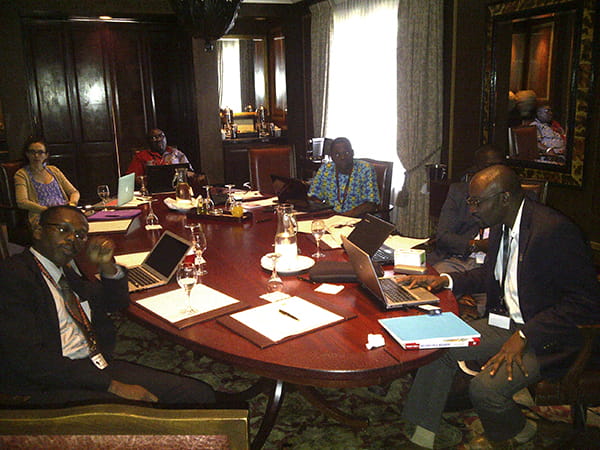 Dr. Facundo Manes expressed his deep appreciation for Dr. Ovbiagele’s presentation in the INECO Symposium on March 14, 2016 entitled “A Weighty Matter: Obesity and the Risk of Stroke” at INECO/Favaloro University, Buenos Aires Argentina.

Dr. Manes stated, “No words are enough to thank you for your support to our meeting. The audience was very impressed by your presentation and the quality of your research.” Dr. Manes emphasized that his team is also very grateful for Dr. Ovbiagele’s help, and his lecture had a very positive influence on the audience. The visit meant a lot to Dr. Manes personally and to everyone who is a part of the INECO/Favaloro family. We are looking forward to continued partnership with INECO/Favaloro University, Buenos Aires Argentina. 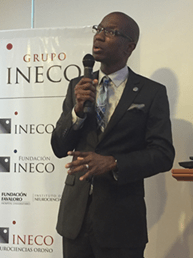 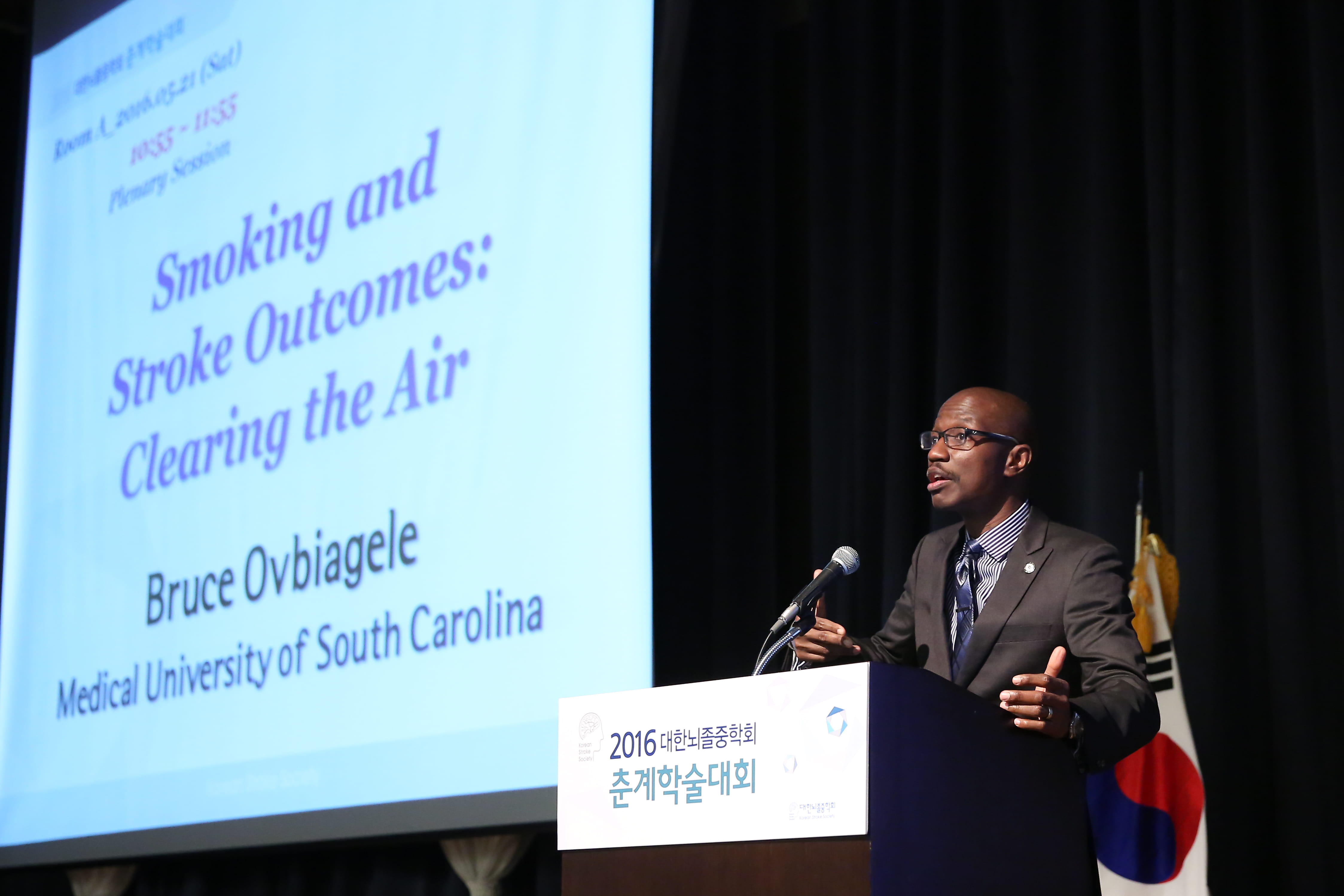 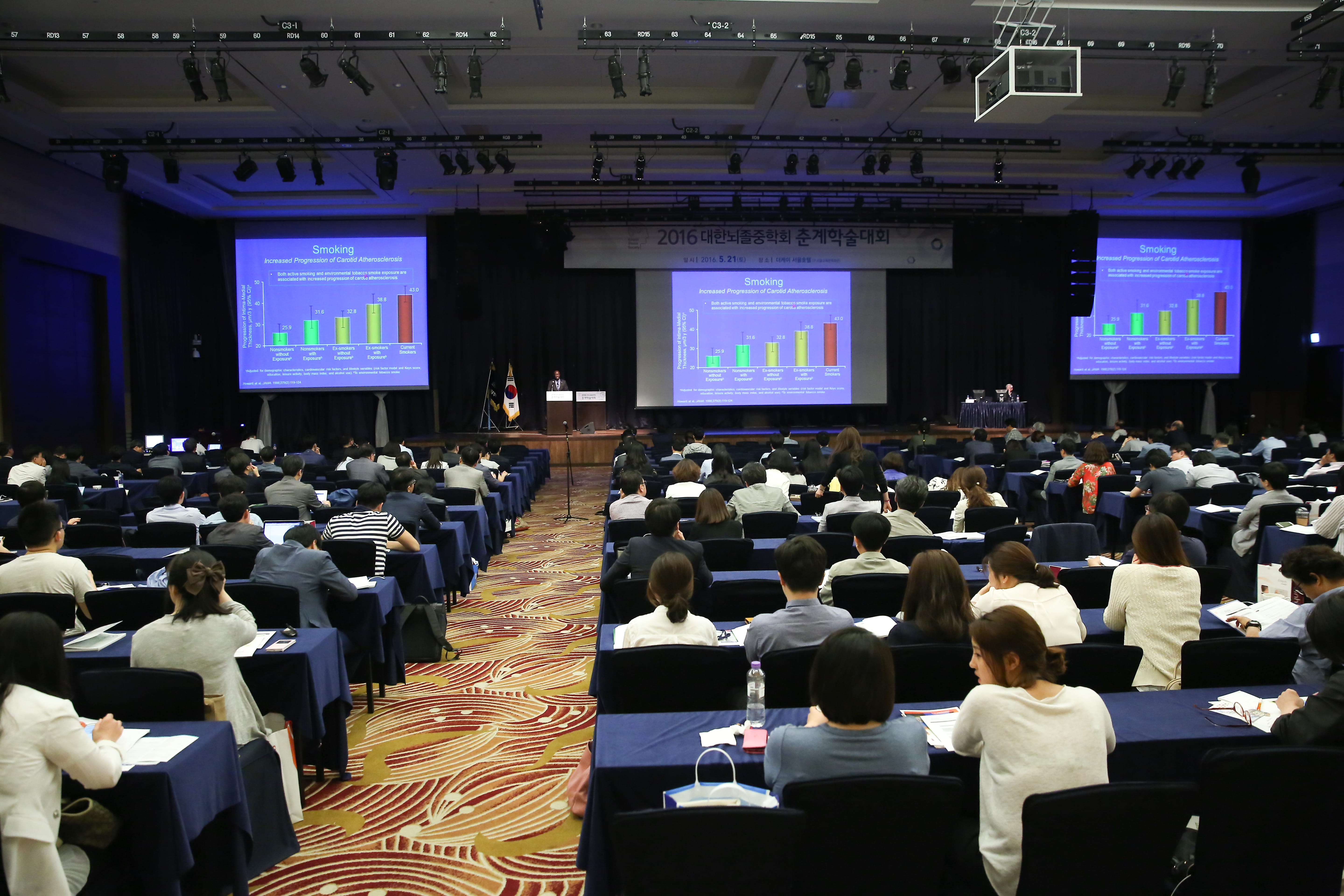 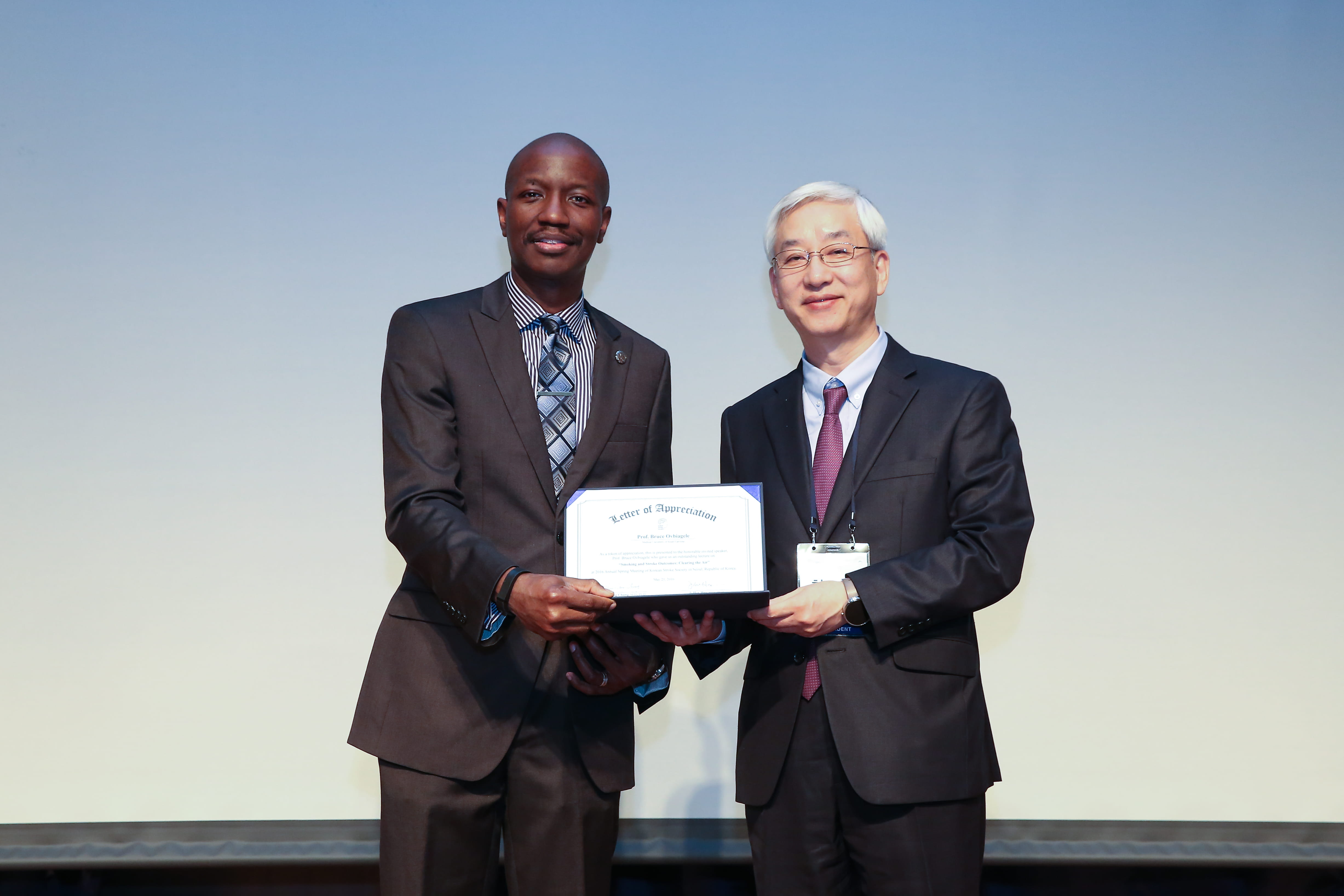